Over the past three years post the admittedly stolen election of 2016, our country has sat idle as we have seen a deposed con man continue to speak to the media on our behalf because the royal magistrate is behind them.  This is a frank conversation about what has gone on as you the American people get stolen from on a daily basis. Your tax money had been recovered and sent to the Justice Department. It was found out a group of private individuals have been laundering it amongst their friends with their goal being to keep it for themselves.

“We’re going to steal all of their (tax payers) royalty money and keep it just for ourselves,” said Robert Stevenson. We must recover that money post haste. Our US Gold standard is a recovered American asset never to be stolen again. We are not commonwealth members. What gives any rights to the “royal magistrate,” nothing.

Here is a photo of him and his friends. 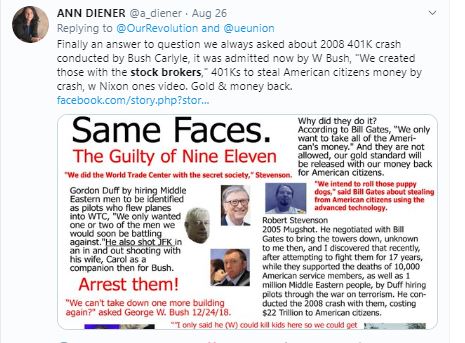 In reality this group has held Americans back from solvency we created.

“We were giving up the jails for the insolvency of America,” said Elizabeth of England hoping for our financial demise. I am against her and the royals serve no purpose as was previously admitted. That fit in with Mueller’s criminal plan for bankruptcy of America, so that is why he went along with it. America will not be bankrupt because of purposeless people and cons in the media. Gold standard and money back kept all along.  Now I see why God wants to decimate the below ground jails. It was a win win for her and the criminal members at the Justice Department, America was left threatened until we found out now. We were very close yesterday, sand was seeping into one with the ones under water flooding.

Anyone vying for the insolvency of America should be seen as criminal. God works here

The below ground jails contract was Stevenson’s threat against the Navy. Why do they allow a swindler who stole an election to threaten our Navy. How much has he cost Americans financially. We need to keep turning him in, and that is how an election is won also. Reporters cannot stay silent and allow him to put on a stolen Rolex from other thieves. You steal through the stock market retirements, you deserve to go on trial.

Here is the con they have been running while they use sophisticated means to loot our stock market. “Wall Street crime is ours,” said the Nixon ones affiliated with  below ones for prostitution purposes both men and women.

“We picked up this below ground jails contract and we don’t know where it came from,” said Stevenson, meaning made up, had no standing, and no legal bounds. You can’t just “pick up” a contract that came from unknown source and violate Americans Constitutional rights.

Stevenson lied daily and said, “I’ve still got a signed contract from those below ladies.” They were Mintakans used as prostitutes. “I call them instead of Mintakans below ones then we can get our prostitution started said Gordon Duff, pictured here. He is connected to Wexner who started Epstein and knew how to run a prostitution ring.

“Why don’t we just lie and say that we had rights to those jails,” said Mintakan female to Stevenson after they found the contract early on. They used it to embezzle your tax money with the prostitutes and the jailer side of Congress through the Pelosi wing.

I was surprised to find out Stevenson stole Americans tax money with this group for themselves.  They have no right to charge Americans for their freedom guaranteed by our Constitution.

“I say the jails can be used and then I’ll take the money from the Justice Department,” said Brian Stafford, stealing $80 million today, saying “I don’t want to put Americans in jail.” This is an embezzlement operation. “I get to sleep with one of the below ones,” will be said by him later. I became President, deposal of Trump, who stole 2016 by hacking, microtargeting and crosscheck as well as Diebold machines, went through and additional charges against him could be added for the oligarchs and other financial crimes including the stock market attempts using the machines, and we own our planet outright. They had no right to abscond with our tax money. “We only want communism,” is said by machines and tape recorders associated with their embezzlement operation.

What gave him the right to use the machines, “I thought you said when we use the machines we could not get caught,” for the insider trading asked Trump regarding the October trades likely to Allen team. Hopefully we catch them and protect our stockholders. Why would it continue?

This proves how the machines work in this diagram that it is true.

How do we arrest this prostitution cartel?  We all own our planet free of charge and have a Constitutional country. Our money back is our tax money is for the taxpayers not them.

Why pay anyone other than me who did our negative install for our planet. No adjudication for our planet is required. An illegal harvesting contract existed and it was illegal.

A lot was done to make me wonder and not get paid by those stealing from the stock market. I still want to make the below ground jails removed. There is a lot that I can do with the money in business.

Why would anyone allow people who steal from the stock market to get paid for the planet I own outright. We should make money for Americans not steal from them when they do not know using machines. Constitutionalism

“The chirpers keep chiming because the top brass wanted me to fail,” and Americans to lose their retirements. They are liable for every dollar.

It was just said to Stafford, “your not bringing people together anymore,” he should have been dumped the moment it was said by Giuliani, “Stafford I can’t the stock market crash,” with the machines. In October 2019 how much was stolen? Why is he in any power position.

“It looks like we’ve been led around her minimum security prison,” said. I am not in a prison. Why. I asked to press charges against these cons. You don’t need to look in my home to press charges. You can call and meet professionally. Agency lifestyle is nothing but con. Why not pay the American voter today and not take bribes from cons.

My house is dirty because of their dark magic and they use spell books. Why was that allowed. Why make a nice home bad, all that matters is the voters winning.

I proved my planet ownership through the other planets coming online. What did they have a fake contract. I always prove myself, so I would like it to be mutual. My data easily stands up in court and under questioning. Lets press charges now. Americans have their freedom without paying cons. “When he came to us he had that fake contract. Why did we believe in him?” admitted. I don’t care.  He belongs in jail with the rest of them.

Whoever said, “We want to press charges against the cocksuckers,” I am on your side and all of my data should be used now.

Who are the cocksuckers? They are an extraterrestrial that has no anal hole who should not be ahead of any American because he has sex with those who steal from your retirements. I wonder how long do they live here. We are prime on my planet I own outright. Why does it take so long for Americans to achieve this. Stevenson the liar on the contract favored him and the did a lot of cross dressing. It is disgusting. We have Constitutionalism and criminals should be outed. All my testimony should be used. I deposed trump and my testimony is validated and we have an election coming and voters deserve the truth.