The Housing Bubble by Cocaine

When Americans think of their own security, most of their assets are tied up in their homes. This election that is most significant and as we move into the Spring many California homeowners are thinking about selling to move to a more affordable state. One in fifteen is likely planning on moving. In fact in all 50 states spring is when homeowners typically begin thinking about selling, yet this spring there is new competition against their housing prices, the land grab stole 2016 is deposed for conducted through cocaine money. 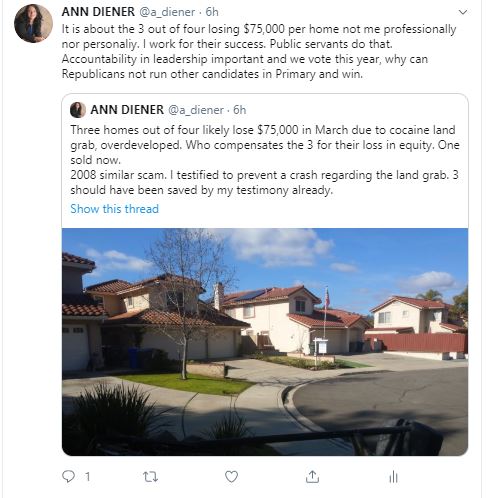 People learn the most by being out talking with people. Here in California as for sale signs go up, big developments are competing with those homeowners. Currently their priced higher than the older homes, however as their likely NSA money dries out, these housing prices must come down for them to be sold. I interviewed a person living in one of the developments who alluded to the fact that she was a plant from Eastern Europe and when Bernie Sanders came here it was said had he met with me, the oligarchs would have to surrender their housing developments, so it is likely they have compensated for the lack of purchasers with people from other countries being paid to make the developments look full so they can sell more. This is a tactic used in sales. Buyers are attracted when they see more people are interested. Please monitor these developments, and there are lots more than those included in this PowerPoint. They built them in all 50 states. In California, they are everywhere and the jobs numbers were fudged by the hiring of construction workers to build these developments through cocaine money.

Yesterday when I was canvassing homes there were many people I spoke with who were planning on or in the midst of selling, yet last night they continued to launder drug money for the housing.

“We won’t jail him because we want that import from Peru to come in,” said about an $800 million shipment. How much does that cost the one in 15 in their equity. Housing bubble on record, posted on my Twitter @a_diener and reported to the UN Office n Drugs and Crime. With an FBI Director who said I was only at the FBI to make the drug transactions go through, I reach out to the UNODC to stop them. From my understanding they cut it in half similar to what they did the other day when a $388 million shipment was stopped so they could take credit for stopping drugs while profiting.

Why are they allowed to do that with Christopher Wray and others including Gina Haspel who as she stated yesterday should have been arrested. They stole election 2016 and should have very little chance of winning 2020, so when do they stop their drug money.

We do not need the housing developments.

Who is going to compensate those selling in the future, and how do we help our planet and country become successful. Yesterday when I sent my data over to Business Insider that ran an article on the Texas steel company suing the Trump Administration, they said that’s what a sexed up, with prostitution known, coked up administration would do launder drug money for unneeded housing that fails, which is typical of his previous business dealings where he goes bankrupt. When I went to DC our White House looked “janky,” and hopefully it is returned to the voters soon.

It was said about him here, what is Trump going to do when his business fails, “He’ll go out and borrow money from someone else,” so the housing in all likelihood will crash, the sad part about it is that I care for those who are selling and lose money because of a deposed con who stole 2016. What gives them the right to continue to launder the drug money to finish their housing.

I want to move on and develop my manure management program for electricity from cow manure and algae harvested from lakes and rivers. That makes electricity from waste products and is an actual revenue generator not dependent on cocaine. I wonder if I should pursue China or American investors if deposed stole 2016 continues. At least investment in that would create American jobs that are legal, electricity and address a problem we have cow manure the source of the algae problem in rivers and lakes. There seems to be a lack of funding here for real projects that is not connected to criminal activity. Maybe I don’t know where to look here. I hope China receives their gold back.

The cocaine housing will still exist though and will eventually have to be sold at lower prices as we approach the summer, and this will devalue everyone by November. It is really a ticking time bomb for the housing market. In China previously they have had to demolish such housing by explosion because there was no one to live there. We need jobs and leadership in the meantime.

We need to monitor our ballots. I am working the election on March 3. I found out sadly, our Primary is likely stolen because of the bubbles, algorithms and programmers again.

Is Pete Buttigieg another fake candidate to steal from Bernie Sanders through the mail ballots? If true why are the bubbles being used this time with algorithms and programmers.  What is the point? Why are they in leadership at all? So much waste of our time and resources. We need to address real planetary problems such as algae and manure and force those who invest in housing to pay for it with their money. We need real winners who want to address America’s problems with real solutions not cocaine money. Real revenue generation comes from exports  of American innovation as well as what we are able to create with what we have already for ourselves.

It was said by deposed stole 2016 Trump who knew what he was costing the voters, “They (Attorney Generals) know how much they (homeowners) are losing,” regarding their equity long term.  All evidence should be used to press charges. What gives him the right to scam them.

Is cocaine transported to the White House today? Who is responsible for the bubble?