Your Life is No Longer in the Devil’s Hands

“I always felt like I made some deal with the devil that does not like mankind’s hands,” said an unnamed source about arranging for his daughter’s birth to him on my planet. I only work with and for God and installed my negative perfectly put in the center several years ago and slowly as our earth turns the dark side, that is connected to an off world agenda, loses. Recently I met his 61 year old daughter who told me about her entry point onto our planet in vivid detail. She remembered about the negotiations for her, last of six children’s, birth.

There was some place in space where alien agenda put individuals they did not like together with our families. She initially claimed she was an off worlder and I wondered if that was true. I found out later that it is untrue, her soul was discarnate and previously part of the supercomputer system that is now disbanded almost. She described where she met her soon to be father as a house in space with no walls except for one small room called the “room for improvement.” That room was very small, had walls and was where the negotiations took place with her father to give birth to six children and a woman he did not want with her as the cutest bargaining chip and I earn their respect for telling our stories. He was told he was to marry a woman he did not like and have six children, and then was upset until he saw my friend’s face. This made him finally agree to the sentence for his life. I suspect they called it the room for improvement because she did not fit in their mold of easily controlled human.

Their life was traumatized with her two older brothers dying at 6 and 8 years old and later individuals around her used dark magic to torture her because of her spiritual side. She almost killed herself two years ago and then was likely implanted as when she woke up after being out for 5 days, a large mass was on her head. I found out what they said, “We’re going to implant this one so we don’t have to worry about her,” humiliating them in the times ahead was said by the NSA criminals. She has continued to live and worked as best as she could. No one should be implanted ever.

She is a kind woman who cares for many and they try to ostracize her. Our planet is working harder than ever for freedom to exist here for all people. It is hard to write this as they read it, the enemy, and it is your enemy too. Who wants their life determined for them

I am working on God determining our lives not harmful off worlders, that exist at NSA. Our Gold standard and money back get delivered to all American people.

Feel freedom all around you and on the beach. Gold

There was discussion among children today. One with bright eyes said, “We get to stay because of them,” referring to alien agenda and a smarter one who was younger and more rugged said, “they did not like that we got a free planet,” and I know that to be true.

We are now making sure that God sets your lives up for success constitutionally.

No one had a right to make any contracts for my planet behind my back as I am our only negative holder and that is and was known. They do not like the fact that I work for freedom of every American.

“I sold her negative set,” was said by a criminal who stole 2018, and just like if you know someone owns the Brooklyn Bridge and you sell it, you have to deal with the ramifications not them. I work for the people and am not part of a religious group in Oceanside I consider criminal. Now we have to correct the life side and I am helping the woman who has had a hard time all her life with evil stuff used against her as I have. It will be nice when babies are born and only know of God’s plans for them and we are almost there

I have been hoping to finish our install soon so I put a lot of work in every day, so that we can move on to other planets. Mars needs its negative placed correctly, and the other planets are owned by us exclusively. Each one was habitable until the criminal extraterrestrials arrived in our galaxy.

I was wondering today if the Chinese were from Mercury, and as our sun heals if they would like to get it back. It seems like their squinty eyes may be because they lived closest to the Sun. With our healed sun, Mercury is habitable and less radiant. Nope, they are from Saturn.

Venus is where the Zetas live, they are black, and they can have it back too. Venus is perfect for a the tan they have as it is more radiant.

I will correct our work as I continue to work for the people as I always have.

Why is my point on a standard sentence need to be stopped. I want no criminals who are on a wanted poster by me to ever stop by. They did what they did and they are criminals.

I look forward to working with non-criminals and I will.

Helmet loser on a wanted poster. I didn’t steal ballots.

Why do election thieves deserve anything.

It espionage to remove our gold standard and money back or file bankruptcy on American citizens.

Below ones are cheap prostitutes as their name denotes. People are better.

Those who stole our ballots should go to jail before the primary. 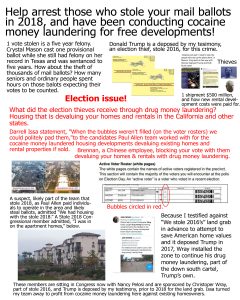