It has been a battle here at my home with the alien agenda with Mintakans and their “dark” magic conducted using the overhead surveillance, and this afternoon it was identified that they had a pod in space that controls the overhead heating, which is harming Californians.

The pod is similar to a satellite, however more rounded and contains their genomic sequencing center, that is habitable from my understanding.

On November 2, 2018, the pods and their machines were noted as “Advanced technology in our upper atmosphere used, ‘to make people feel miserable around here,’ unseasonably hot because of it.”

I have always enjoyed maintaining a nice clean home, yet these individuals for months and actually almost two years now have been using the overhead and there technological abilities to do what they term as “quest” here, not physically of course, but through the use of magnetics, unlawful surveillance and overhead, now identified as pod satellite based technology. It is very hard to function with them in the air, as they note each movement you make. Initially they sprayed magnetic fibers over my home and these were found on my degauser photo from my cox cable wiring.

This afternoon more was understood about how it works. I heard the Mintakan female remark when I went to move a cup of old coffee I had to my trash can saying something close to “There wasn’t garbage moved so we can’t use it,” referring to the cup and the old coffee it contained to quest dark magic for me to be harmed with the item in some way or delay my positive outcome. Their magic is however, being broken down today. The Mintakan female was talking with another alien agenda team member, and he told here, “The magic we had works only when the time sequencing is ours.” To understand this further, we have to look at the power of observation in regards to dark magic and spells. When another person was on the overhead who cared more for me and did not want me to suffer here, and noted that I wanted to move something, that individual helped to make it safer for me to move the cup if I wanted to move it to the trash can. “We didn’t like the magic affecting her,” he admitted.

The overhead surveillance has been an issue of contention here, and it has been used very harmfully. Their goal has been to make my home dirty and to monitor each piece of garbage I put in my trash cans. After hearing the elder referred to above referring to the “time sequencing,” I decided to play a little game with them to eat a chocolate I had bought yesterday, a York Peppermint Patty to see what the reaction would be.

The minute I thought about the nice restaurant where I bought it, as Stevenson has my headset that is connected to the overhead technology and I enjoyed being with the people there, it triggered a “harm them” mechanism relating to the people at Lilo’s in Arizona where I stopped yesterday, so then I had to temper my thoughts back from thinking pleasant thoughts about the people to prevent Stevenson from harming them with this criminal gang operating the overhead. I noted it so the individual I will call elder then got distracted and I decided to light a cigarette with my lighter. I dropped the lighter and because of his distraction the lighter was not timed and fell naturally. When I did not like the positioning on my carpet, I bent over to move it and the elder got back to his routine of noting and positioning as well as creating tension with each movement of any object in my home.

It was admitted by him, “We did that so we could sequence everything,” he said regarding the magnetics, machines and surveillance operating here likely connected to the overhead and pod satellite in space. When the surveillance is turned off, everything is natural and normal, as it was when I dropped my lighter and the elder was distracted by my eating of the chocolate.

They had been using advanced machines to inject the liquids I drank with toxic substances and this was admitted to long ago with the targeting fluid in water, that causes white flem to be thrown up from my dog when he drinks water they inject. They also likely inject “magical spells in coffee and other cups as I have experienced, even some of it has been chunky like tea leaves inside cups in my car where I spit it out.

Magnetic fibers sprayed here by them.

Proof: September 17, 2018, “Rosicrucian statement as proof, ‘We can no longer use our machines.’ These are machines for remote poisoning like the ones described yesterday used by Paul Allen.” They connect to the known chemicals sprayed in the air, and are also known by Robert L Stevenson as “running the Fellowship,” vans and advanced technology operated through there to harm me and others.

This relates to chemistry put in the air that Allen admitted, “We have no right to put that stuff in the air.”

“We need to remove Paul Allen’s machines and his vans,” said San Diego County Sheriffs Department in Fall 2018 and it is less now, however the advanced technology still damages my home, and will be destroyed soon.

Gordon Duff Duff part of their criminal gang also said, “If we lose the vans, I can’t operate my machines anymore,” machines that poison me and other people in the local area as well as are used for surveillance and dark magic concocting. This was said around September of 2018.

Duff has done other harmful work in conjunction with the machines and said, previously “I need her bed sprayed with those chemicals we put on,” those were likely used for the targeting through unlawful surveillance, monitoring items I move around my house as they threaten me using the telephony in my home using chirpers, also called screamers. The overhead surveillance is used to “quest” with meaning poisoning my home to put dark magic and uncomfortable feelings here. These are nasty individuals who will lose, and they are wasting my time as well as costing American standing daily.

To be noted, their surveillance is the only thing making my environment unnatural and difficult for me to live in, unless I play a little game with these harmful alien agenda team members and distract them. They are harmful to humans and animals alike, and have killed children, as well as adults even for consumption. 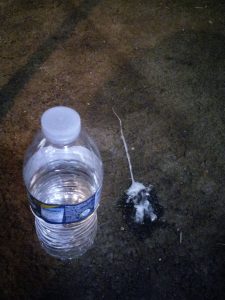 The white throw up contains the powdery targeting fluid that is remotely injected in the water bottles at times.