Who puts real discretionary income in your pocket with America’s restored assets?

Our gold standard and our tax money, known as money back are America’s recovered assets, and we have to wonder this campaign who will make Americans rich in the future and not steal it from us. Discretionary spending has been at an all time low and as we head into the primary, who is working for American homeowners and taxpayers. They put in con men and women into Congress known as stole 2018 to steal more from you through Russia. Many of them are House members, who can be voted out this term and it would be nice to have the McConnell list from last time to know who is who. “We knew who every winner was,” said McConnell, and as he has been criminally working with the Russian Ambassador to steal or launder your tax money known as money back through them, espionage and financial crimes charges are long overdue. With those two details this Congress could be charged with the same. We are ready to vote in 2020

These old guys were also brainwashed by an old contract that is invalid that stated that I as our only negative holder could not own our planet until all aliens are dead. Do we have to make them dead first? It used to happen in under three hours because they harmed our sun then to gain illegal entry into our galaxy and our sun is repairing itself now with our negative install. If not they would have died upon entry into my galaxy. Other planets are turning on. Yesterday one of the coldest smaller planets started after Uranus had been operating. It was very painful to my hand. Why are we programmed against our interests to accept less than everything back? I keep working hard for the voters and no one including me likes to be stolen from. What gives anyone the right to steal from your income? I do not want to talk to those who steal from me. Why is it that because I put that down, “I can’t say she’s not allowed to talk to anyone from dark side.” I don’t want to talk to dark side, that is already criminally complicit in the theft from Americans through the stock market repeatedly. I own our planet and became President. “She really became President and owned our planet,” said. I want to get my stock market convictions made and American citizens repaid for the years of financial damage caused by the predators. All my data needs to be used to press charges against them and recover American assets. There is no saying because I made the complaint, it cannot be used. There is no secrecy of the planet owner, as I have documented my install. We owned our planet our right before our core was moved, said then by the lying space travelers, “If we could just move the negative then we could probably get through,” and they never moved it back to secure our planet, they just kept gaining ground against us until my install. They knew what they were doing then and smuggled one of their young men down so they could later gain power over us. Said by one of those who bought into the extraterrestrials plan initially and was drained by them then, “So much disdain coming from that extraterrestrial. They always worked for us,” as they began to subjugate him and his friends who were later totally conned by them.

Before they arrived here, humans owned our galaxy. They asset stripped every planet that is coming online now. Humans through America and me with my work are taking their power back now. Said by a con artist, Duff pictured, who stole your 401ks likely in 2008, to me this morning, “What are you going to do with the money from that additional job.” They should not be monitoring me or anyone, as they clearly have intention to commit financial crime and do it daily. To put a woman down saying she does not earn enough income and when she does to try to prevent her success is criminal. There is no stealing my planet I own outright and the authorities should stop their income streams finally, and repay all Americans just compensation. Please file a restraining order against them. We work hard and our government should work for us. Where is my $800,000 for my Presidency of two years, it was criminal for them to say because I own our planet I did not have the right to have the Presidency then. How many aliens do we have to kill. Green dead. It is up to God. Zygote kills all hopefully soon. My investigation should have been paid for that validated my testimony. That is in addition to the $800,000, because deposal went through and the testimony was accepted. To validate it and provide additional data to press charges against the same stock market crime he was tried for, such as the October 2019 data, should be extra.

I want no restraining orders from Bill Gates who was proven to have lied and said I committed a murder, which I would never do, to obtain his fraudulent contract.

With all of these evil doers in my life, no one has a right to claim I should have had children. Imagine them monitoring your shower daily. When you know the truth about our history, why be ignorant. Do they expect me to carry a gun and use it liberally? No thanks. Intelligence is used daily and there is no point to call the people ignorant, when leadership is ignorant by not protecting them and increasing our holdings of other planets. People have a right to use their knowledge and intelligence to save all American people. When data is obvious it must be turned in, that is expected by the people. I have a right to earn my income and for our incomes to be monitored for our success. Why protect those who steal income, to walk into a green traitors trap. At least I learn my lesson and use my data appropriately. Data is earned through work and that work deserves to be paid for. 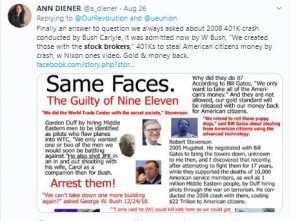