We have the opportunity to be admired globally by working with the European Union to address the refugees American war criminals created through launching the war on terrorism since September 11th, and we need to complete prosecuting the individuals who conducted and profited from the incident.  This small group of individuals, only approximately 800, have been found to be the source of every stock market crash and housing crash in the United States of America, causing 327 million American citizens misery and financial hardship for seventeen years. If it was factored the amount of income and equity, these 800 individuals cost American citizens, it would be in the trillions of US dollars. We need a reparations budget both internally to the United States of America for all American citizens who have been affected by them and externally for countries affected with thousands of refugees.

Trump’s team does not have any accountability, and continues to attempt to harm us.

There is no reason to allow these individuals to continue to attempt to commit genocide as Joseph Dunford admitted to with his intentions for Pakistan and Indian on February 26, 2019, “We were out to create genocide.” It is disgusting, that they are using American real estate purchased with cocaine money for this through John Brennan to profit from here reducing American liquidity and equity through exponentially increasing the cost of real estate without the value. Brennan connects to their cocaine network, as he admitted on January 4, 2019, “I use the Fellowship (Oceanside) to transfer drug money.”

“That is why we put Brennan there,” said Dunford on February 26, 2019 to continue to work their cocaine transaction for real estate that they personally profit from. I have turned the cocaine network in to the Federal Bureau of Investigation repeatedly. I am an anti-communist, Brennan is a communist, I am a Constitutionalist, and am still President due to the deposal of Trump. These individuals are really disgusting with their sexual stuff, and I am not going to mention more here.

“We only targeted her (me) because she protects American citizens,” said Brennan about me, meaning the entire Trump team with John Brennan and Hillary Clinton who said the other day, “We wanted to kill all American citizens,” do not support the 327 million citizens and service members I as President gold and money back of due to the deposal of Trump, support every day with my own money. I have done so since September 11th to investigate their crimes.

We need to move forward beyond the perception that American Department of Defense resources are being used to steal from countries internationally and commit war crimes, as well as steal from American citizens here in California.

Dunford said when his plans were outed about the Pakistan and India conflict, which was de-escalated forcefully by the Pentagon later through Pompeo being operated by them, “Now it looks like we did all those wars overseas to enrich ourselves.” Pompeo then added “That’s exactly why we did the land grab over here,” in California. Why are we allowing them to steal our real estate through their devaluation tactic here using the cocaine men? The powerpoint here details their scam, and I have conducted a long investigation to identify what they do. Can they be arrested now? I need to be able to work in Washington DC and appoint a new FBI director.

Why would we even pay them a salary? They should be arrested for accepting cocaine bribed real estate payments from sales and rents they are expecting. Congress has been informed and all intelligence agencies know they stole election 2016. It is not hard to fill their positions with qualified American citizens who would accept a salary, without having side businesses operating against American citizens interests. This side business of “land grab” is not an enhancement in American citizens lives, it is theft using cocaine funded assets. I can meet with anyone, anywhere at any time. I am not in jail.

The governments of Iraq,  Afghanistan and Syria as well as Northern African countries such as Egypt and Libya that have been burdened with combined conflict created by the American war criminals, should be provided with reparations from our budget surplus and we would be able to conduct intelligence operations internally to identify additional terrorism suspects and networks.

We could supply prefabricated housing to address their needs in the previously war torn countries, this would reduce migration into Europe and help to restore the diplomatic relationships that Trump team destroyed there which are age old ties, through wars and depressions America and Europe has been partnered to advance human goals and objectives. An intelligence training school can be offered to uniformed service members in conjunction with renewable energy building trade school classes.

Americans who support elections and say that overseas need to realize that our election convictions are important to our credibility internationally. We cannot be credible and have stole 2016 speaking to the media. We need our convictions to be announced and they are crosscheck, electronic marketing (microtargeting) and Diebold Nixdorf.

There is no reason not to interview me directly, I have the testimony that even Trump admitted deposed him, and I can meet anyone at anywhere any time. Contact me directly.

We need to rebuild our Naval infrastructure that these stole 2016 individuals have depleted and harmed. We are so insecure right now with the oligarchs known listening. The enemy has dissuaded the Navy from picking me up, as they said, it was the telephony man. He hired the pilots for the planes that flew in the buildings on September 11th, and he is on pharmaceutical antidepressants, working for communism on American soil since 1957, and he also killed JFK with his wife. It is nice though because we now know that George W. Bush connects to JFK’s killer, as it is him. I am hired to put them in jail.

To be noted for any court proceedings Robert Mueller is hired by Donald Trump to conduct unlawful bankruptcy against American citizens,, and he has been providing free legal assistance to the Trump team on how to avoid custody, since he has been deposed, working with cocaine men.

Mueller complicit in unlawful bankruptcy attempt against American citizens with Russian Oligarch he likely knew about from FBI recorded conversations. 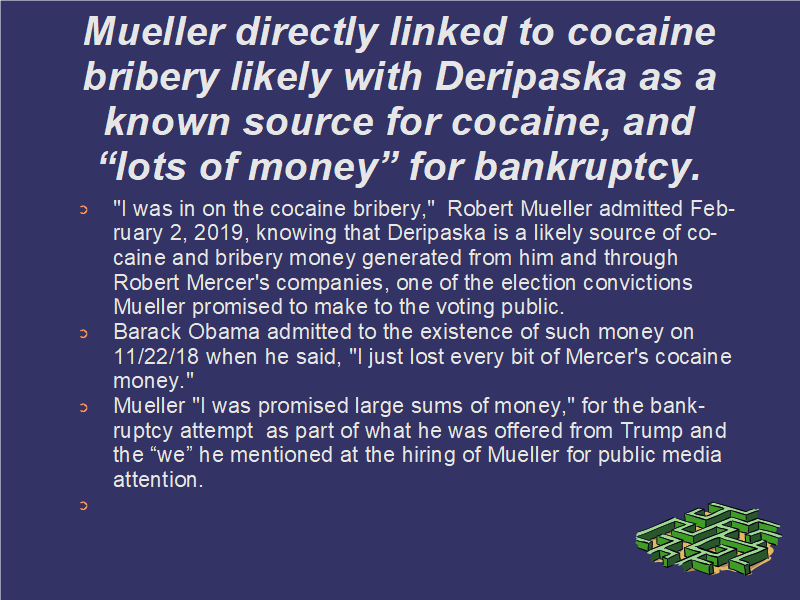