More Supporting Data on What Needs to Be Replaced that was Operated by National Security Agency Against American Citizens.

Presidents such as me, have multifaceted careers, and serve American citizens however they can with their work. Trump is deposed for a long time now and we found the main block, who is the FBI Director, who post deposal kept working against American citizens to launder cocaine money to continue the land grab Trump is deposed for. “I was only there (at the FBI) for those cocaine transactions to go through,” said Christopher Wray a few days ago, and he is on trial. He needs to be put in custody for the cocaine men to stop here reducing American liquidity and cocaine trafficking.

A new FBI Director must be hired by me and my team in DC. In the meantime, I am working on a story to assist American citizens and prevent surveillance and inspection that should be deemed by now as fraudulent. Individuals involved in both the creation of terrorism and the screening for it need to be sued.

“We cause terrorism, and then we get paid for screening them,” said Arnold Schwarzenegger involved in the case I am presenting for a lawsuit. We women and men have been gropped and screened for almost 18 years now due to their terrorism. I remember when Governor Gray Davis was recalled. The recall in reality was not voter approved. They lied about it in the media. I worked on phone polling voters during the recall effort and the majority of the people I called were against the recall effort, so I was surprised and saddened when Schwarzenegger got in despite the voters likely voting against him. Then soon after, I was at the San Diego County Fair, where fair goers could typically walk in and out easily without going through metal detectors. When Schwarzenegger came in to office, metal detectors moved in unknowingly to the public, they were likely setup by his sides. 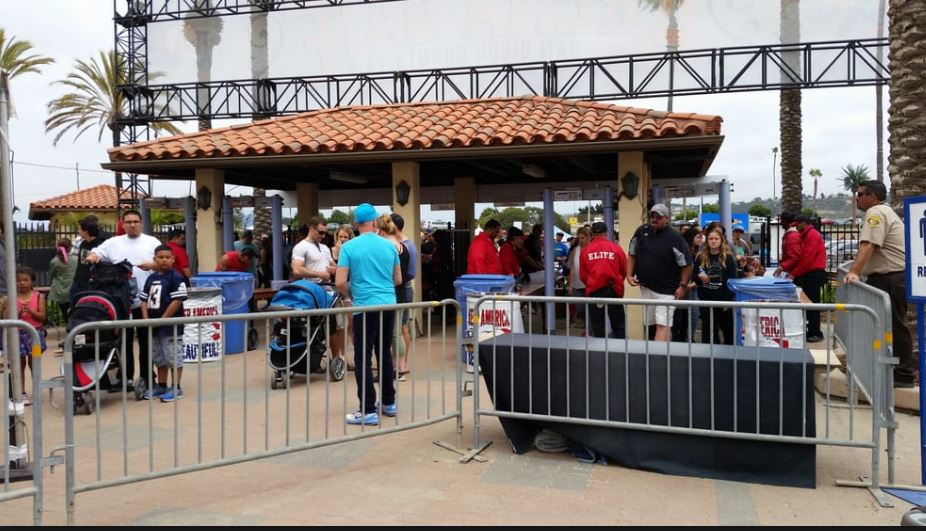 Why is this required when they create the terrorism and terrorists they do not want us to win against?

These are the same individuals who are involved in attempted communism on American soil, as were referred to here.

Their entry point was at Keyport Naval Undersea Warfare Center in the Northwest as was outlined here.

James Slyfield who worked for me as a contractor was suspect then, and he interfered with my meeting an important Admiral to garner support for my magazine I published from 1997 to 2001 for the Navy in the Northwest. I found out yesterday it was Slyfield who was working with them in the background for communism on American soil against American citizens interests. Slyfield, who is known as “Dirty as shit,” now, considered communism personally viable for he and his teams against American citizens and said back then, “That communism (electronic) is really going to help us make money.” Slyfield was working with the redhead mentioned in the article, “Chinese Communism Entry Point in America through Giuliani and Keyport Base,” and they partnered with the individuals who conducted September 11th here. When I hired him, I thought he was a Navy Seal who needed transitional assistance to a career in advertising and subscription sales. He was very deceptive.

Who likes getting a basic mammogram at the airport?

What is seen by the Full Body Scanner, an invasion of privacy by as stated the creators of terrorism. Perverts.

These individuals have acted with impunity creating the same terrorism they are screening us for, invading our privacy at the same time. Then internally we are so conditioned into thinking there is some great threat out there that their machines are protecting us from, while in reality, they manufacture the threats as was said these threats are computer based. This is also known as the package they have been working on against American citizens interests. The communist Chinese sent containerships of unlicensed technology here to be used against American citizens on American soil that I found out about on November 28, 2018. It should have been returned from what I understood here.

This has been one long battle with the HAARP technology that needs to be brought down from space and not used against American citizens or soil. It is designed to even confuse local law enforcement and prevent legal and lawful arrests. People need to see me as our President and an American public servant. A President is hired for that. There is always the statement,”You get to be President tomorrow,” I am President today. I am working and anyone can pick me up as President, other than the guilty communists.

I want to work with Congress and get to work on American foreign policy to bring us back up to favored nation status, American citizens deserve that leadership. Should I fly to DC today to get a new FBI Director hired?

There was never a gender issue when picking me up as President before, and then honest Admirals here were told about the headset and they were told that it was some stepford wife thing that Stevenson installed. I only served as his informant. There was never a personal life with him. I only met him once in person, personally. My focus has always been intelligent hard work for American citizens. The headset was put in by him covertly working with the communists side against American citizens and against me professionally.

I meet thousands of people and no one knows I even have it, so it is not right to hold that against me. I want all of their devices used against me and American citizens delivered to me. These are criminals that deserve prosecution after 25 years of harm inflicted on me covertly.

Stevenson said when he met with the communist Chinese bribed Department of Defense civilian employee in 1997, “she’s going to get you too badly. So I’m going to tell you what I put in,” he said pointing to the left side tooth area referring to what he knew about the Chinese bribery going on and had probably been told by the individuals there. Stevenson has stalked me with the BlueTooth hardware and operated behind my and American citizens backs for 25 years now. I am able to remote view situations when I am close to the subjects in perspective. 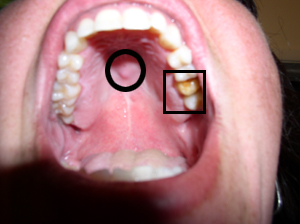 Roof of Mouth Strange Bump and Area Stevenson Pointed To.

Are any of them caught today? At least yesterday, Admiral Center admitted that we should have met to talk about my magazine back in 2000, rather than having the meeting set up, which Slyfield harmed both of us to “bring communism here.”

We need no communism, Constitutionalism only, and real election convictions must be made without Robert Mueller, hired by Trump for bankruptcy of American citizens, and any of the stole 2016 ones who were in on the communist threat cocaine bribery scheme with the former deputies men. Our gold and money back must be delivered to American citizens with our Presidency for American voters to vote on. No cocaine is needed, nor should be distributed or trafficked in America or elsewhere with our help.

Pre September 11th, the group of communists outlined here said the following “why don’t you set up a system of controllers were evildoers can operate the machinery” said redhead regarding using the National Security Agency to house the technology to orchestrate horrific terrorism incidents such as boat explosion committee intended. I am against them and have turned them in repeatedly to the Federal Bureau of Investigation. There is even a flyer that does not include the land developers they have been working with. 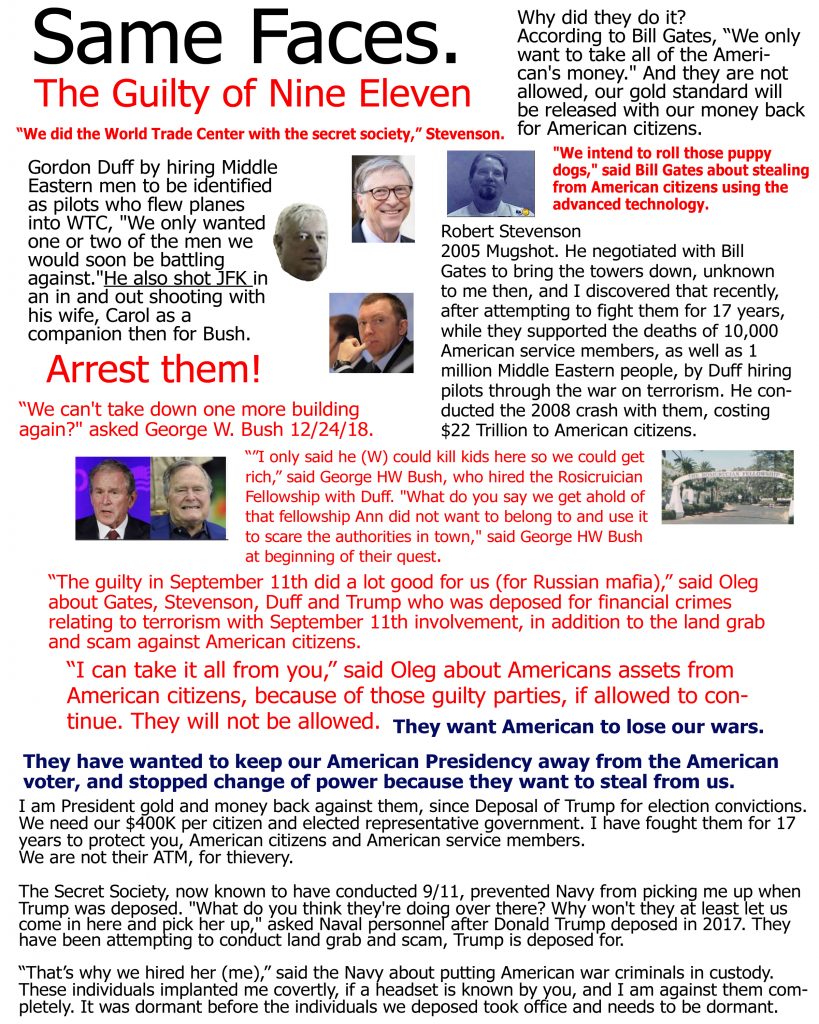 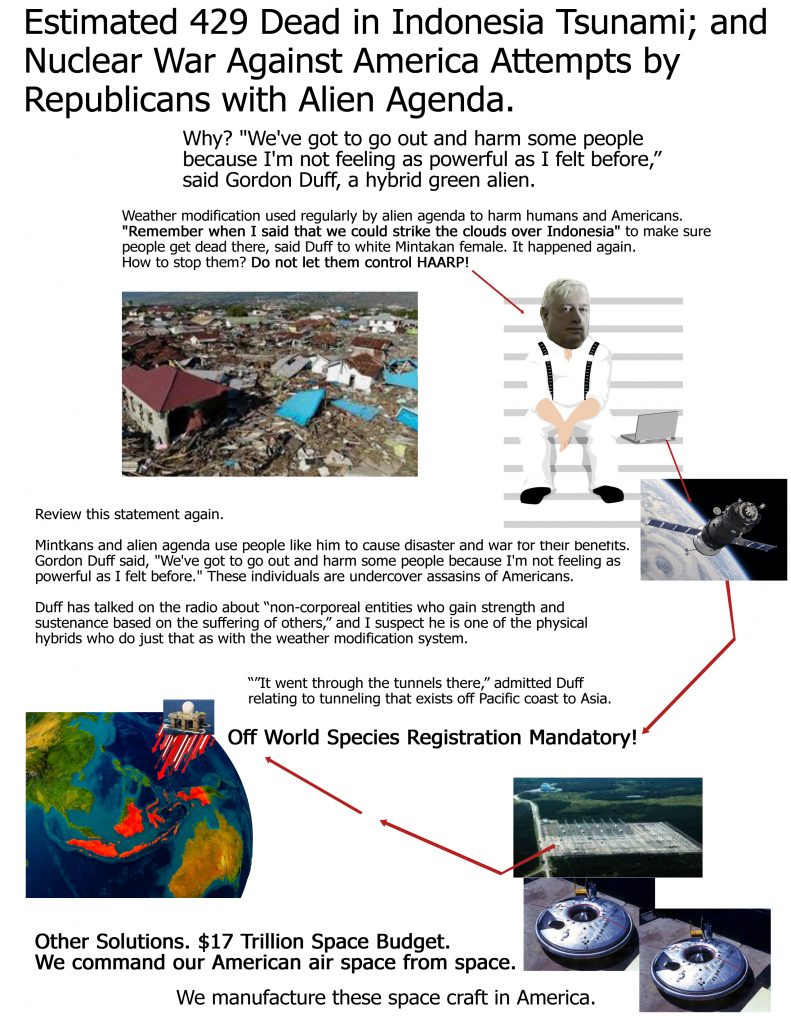 How their computerized system works that must be brought down without the communist side involved. No nuclear or other wars need to be started by them ever again. Americans must maintain their standing through the NATO talks on Afghanistan.