Watch for devaluing of your real estate in March 2020.

All battles are local and individuals always think of me as a peon because I work a regular job that allows me to gage American situations on the ground. I provided testimony against the land grab long ago, and am one of the few people who continue to care about the American homeowner’s values. Donald Trump who is deposed by my testimony did not win 2016, he stole the election as Mike Pence admitted, “We stole 2016,” so the fact that he and others laundered drug money and put it into housing I testified against is significant.  74% of America did not vote for them and of the 26% who did vote for them in 2016, probably about 24% would be angry to lose 10-40% of their home value because Trump covertly laundered drug money with other Congressional members to put into housing developments competing against their homes up for sale this spring.

Over the last month I have been canvasing homeowners and found out at least one in 15 intend to sell with many moving out of state after spring time. If you have a 10-30 year old home in California and maybe even in the USA, as I saw many similar developments cross country, and intend to sell, your home maybe competing for sale with homes in developments acquired through methamphetamine and cocaine laundered funding. Here in California, as you and your wife commuted to work, working 40-50 hours a week each, stole 2016 Donald Trump and his teams have been building large housing developments that have not really began selling yet on cocaine money. They had tranches of $500,000,000 in drug laundered funds to put into the developments that will be competing with your home paid for with real work equity you and your spouse put in, 2080 hours per year by each of you. His and their homes will start selling soon and there are already more than enough homes on the market, so when thousands of homes become available in spring, what will happen to your housing value if you and your wife decide to sell this spring, you guessed it, you will lose that equity you hoped to receive when selling your home as you may have to sell way below market value because their drug money laundered homes are competing with yours. 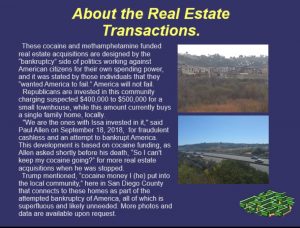 Today, I yet again asked to press charges. Deposal of Trump went through and was not completed. It must be completed before the next election. I provided my testimony in earnest to prevent homeowners from losing their equity through his scam against America, what he termed as “the largest land grab in history,” basically acquiring housing using cocaine funding. These are huge developments locally and there are plenty of existing homes on the market, so when spring hits and the one in 15 list their homes in competition with the new cocaine housing developments, all prices will drop, criminally against the homeowners who earned earnest income and paid for their housing earnestly through work, not drug money laundering which is criminal. It is likely intentional by him and his team, and it was surprising that he had that level of malice towards the homeowners, and voters truly intending to steal their wages through illegal competition with drug money laundered housing.

Trump actually said this, regarding homeowners losing their wages, by devaluing, that he encouraged through use of drug laundering,  (“Keep up the devaluing,” said), on January 7, 2020, Trump said this, “They (referring to AGs) know how much they (all Americans who AGs serve and protect) are losing (10 years or more saved wages in housing equity),” and stolen by a deposed con artist. It is chilling to think an American President would enjoy stealing American citizens’ wages through their home equity. American Presidents of our past have sought to enrich our country and make America number one and the most profitable globally, now not so much. He sees you as his ATM. I guess that started on September 11th, when he and his friends knew and some of them planned the act of terrorism against American citizens on American soil, so they decided to play the stock market that day and make money while 3,000 American citizens were killed. He made money that day, while the American bodies smoldered both on the ground and in the towers. Yes I think about it daily and have wanted to put them on trial for over 18 years now. We have a right to live in a world free of internally created terrorism and have a right to fight them until they lose.

We have a right to hold onto our income, and not be cheated. That is what American intelligence should protect and serve. No one wants to see the person who stole 4,160 hours a year from him and his wife on TV. We vote this year and it is too bad Republicans cannot get someone on the ballot to protect their working hours.

Constitutionalism exists and we must speak truth to power to protect ourselves and each other.