Disgusting things were left around my neighborhood. This intended symbolism is carefully placed by individuals who typically do not live on my street.

I found today two pink items, one on my dirt, a pink straw.

I am immaculate and know every item that is surrounding my home. As I was walking, earlier there was a pink fuzzy item in front of my neighbor’s home.

He and I are both Spiritual and not conventionally religious. They have used very powerful magic at times that can cause bumps on hands and other symptoms. their magic is going away and being revealed.

I also found a feminine hygene product, and this was in front of a single mom’s very nice home on my street, one of my friend’s. 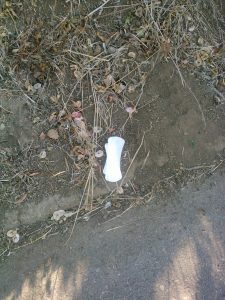 These are my friends surprisingly enough. Luckily they did not target the same sex couple who lives down the street. It is disgusting, religiously biased. Freedom of Religion exists in America.

It is because of everything that has been heard on the radio transmission device in my car and inside my body that needs to be turned on “low volume” and finally, turned off permanently and never used again. This stuff has been inside my body and brain for 17 years or more and was turned on by bannon first after trump #crosschecked the election I suspect. The linked article was published shortly after the election and then microtargeting came into my purview.  “i’ve got you today.” The individual in the quote requires proper investigation for election fraud. He is directly related to microtargeting.

And now I am slowly beginning to get “barbequed” I can feel it in my lower jaw and arms and now back.

It is too embarrassing to admit to, and I am afraid that people will not admit to it when I say they are committing a crime by assault with intent to maim or abuse and sometimes intent to kill me. That’s what goes on repeatedly. This has been not a case of “too much revoking,” it has been a case of identifying the perpetrators and getting them caught. Print It!

This connects to “master plan.”

The interesting thing about my life is that I was illegally framed by government officials.

"That witness is too honest." PRINT IT!

It is time to stop protecting the evil doers and criminals.

In 2001, they made it seem like I was bought and paid for by wealthy men, which was untrue. I started my magazine with my own means. I have my accounting and actions to prove it.

There was investigation back then into suspected bribery back then which killed someone, an unknown to me Community Programs marketing associate.

When will all of this be publicly released to free America.

I have had no one pay $75 for my event tonight, so it is canceled.

I suspect gordon duff framed me with an illegal drawing.

The Navy is “insensitive the cocaine” using men. They need to be arrested.