Have Trump Team Hold Their Deeds

In real estate sales, it is where the rubber meets the road that one can say about the value of what you own. An investor could own hundreds of properties, and be our financially millions of dollars in maintaining the properties until they are sold. I was in vacation ownership for 16 years, and you can have lot of inventory, however with no one to purchase the inventory, the company acquires debt from resort construction. This is significantly less than what is involved with the large cocaine asset financed developments here. If few purchase the inventory, the properties will reduce their values to the point were even the property taxes are too high for the prospective buyer.

For some reason since their quest, people do not believe my vantage point that I always hold, which is that of an honest person who has interest only in the highest good for people involved. I am a neutral third party. I have been in sales for most of my life and a product has to be wanted, needed and affordable to be purchased. You can build 1,000 homes and if there is no one who wants to or can feasibly live there, then few will.

These individuals involved with the cocaine financing know that, and they had the intention of defrauding the small unknowing investor and forcing them to pay the developer carryback.

“Then I get to keep that money,” said Les Wexner team about by the amount of money the small investors, such as service members Gordon Duff got involved here in the large land developments, when they have to pay to sell their “investment properties” short sale, similar to what those service members pay when selling a car with negative equity.

I suspect they may have offered that to other local individuals to participate here, they were called “boat explosion members.” The marriage and family counselor got the idea, and knows what they are doing now when he just admitted, “It looks like I may have to sell my house to pay for those they are offering here. They can keep their notes,” deeds. This is the scam here.

“Executive Order. President Ann Diener. As malfeasance has been found at the Federal Bureau of Investigation, all all appointed position and the individuals those appointments hired can be investigated by outside agencies.”

The “Largest land grab” and scam against America had been continuing through the other facets Donald Trump had in place pre-deposal and his teams chose to keep those operating despite the deposal being correct for the cocaine bribery to continue through the Federal Bureau of Investigation.

Yesterday this was found to be the Federal Bureau of Investigation Director Christopher Wray, who intended with their cocaine men to plant drugs in my home. “Slip her cocaine,” he said. Wray likely was involved in stock transactions on the back end to provide income for criminals connected to the Boeing crash, as he stated, “Do not use the pay back scheme,” that is similar to what George HW Bush used through the 2008 to pay back Robert Mercer detailed here.

The individual who was hired by the Navy to perform the deposal is involved on the back end with the scam against American citizens and the land grab, and after Trump was deposed he was asked I believe, so should we stop the land grab?

Brian Stafford replied, “I don’t see why. We’ll just continue on with the plan, we had in place before they deposed him.”

This plan is now stopped.

Service members at the Pentagon were sitting there calculating “monetized assets” they knew nothing about before Les Wexner, who wanted the properties ultimately sold to communist Chinese people, after they were foreclosed on for Vancouverization of California. We do not need Vancouverization here, not that I am racist, just American and do not like other nations’ immigrants forced on us through large developments and with the higher than likely penetration of American soil and citizens through hacking and vulnerabilities perpetuated by communist Chinese bribed individuals cited here, this is a significant intelligence problem to monitor especially if they live here.

Why would Xi Jinping want his people to live here on American soil?

Stevenson and the cashless crowd gave these service members the idea with the Wexner, Duff “quest team,” our for bankruptcy and no elected President in our future as they stated would be better than conventional American finance. Trump has been involved in crash and dash properties before that have gone bankrupt and it was said not to long ago when asked what will Trump do when these properties tank?

“He’ll just go around and borrow money like he always has,” said about Trump on December 11, 2018, if the City of Vista goes bankrupt because of his projects’ bankruptcy. “Should we get out of here?” Trump asked then earlier because they began to recognize him as a likely con artist.

Election 2020 will happen, and I am running as President gold now.Money Back can help to make good on our promises to American citizens for a better future.

Service members and others here may not realize that long term these small investors may have to sustain the “investment properties” with their private monies and income.

Trump said a few days ago when asked if he would help them with his riches, “We don’t have any money to pay for your investments.”

“Nothing then?” was asked by the service members.

Their teams wanted to collect service members incomes after Wexner gave them the titles to the properties.

I told the Department of Defense to not accept titles to the properties, and let them go bankrupt.

Wexner admitted then, “I’m going to have to pay for all the stuff based on negative (debt based) financing I created with my gold money,” which is good for us. If locals here are involved in these investments, force them to pay and not you, as we investigate them internally through the Department of Defense and the Federal Bureau of Investigation Internal Affairs as this was set up likely long before Trump took office. These oligarchs were participating with Trump teams to loot American liquidity which we are stopping. Our US Gold standard and my money back will help with to remunerate the suffering these individuals have caused.

We need to take steps to remove the oligarchs off American soil immediately as they will not be friendly when their assets they counted on stealing from American citizens fall. No crash of the stock market is needed to make up for the loss. They must be arrested now on American soil. We have a right to wrongfully arrest the Stevenson cartel as one of the components clearly left in illegally to continue the land grab. They will go down now either way. There is a price for criminally minded individuals who steal from everybody. 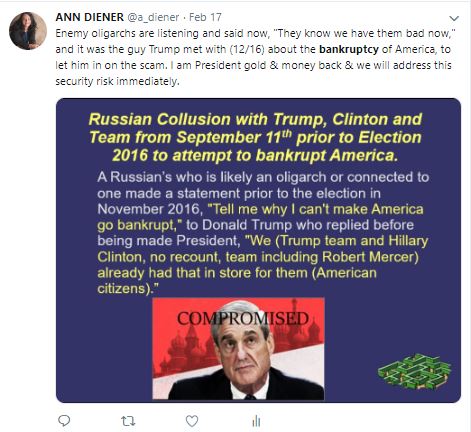 Trump Team with Oligarchs intended to bankrupt all American citizens and every supporter to tag and bag them later on. I stopped them and I am still sitting here. Gold and Money back is ours Constitutionally.