I have to finish my convictions.

Deposal of Donald  Trump who is technically a felon for the election theft of 2016 and deposal of him went through long ago. It was admitted to and I know prosecutions are on their way. I have my data proving the election was stolen. He also should be charged for the stock market crimes he committed with the overhead. How was it done?

Drawing rights should end with this image posted. Drawing Rights are from the enemy Cheney discovered. We should stop using them so that we can be free here. Gold standard and money back get delivered sometime soon. All headset use should be stopped at this point and they do connect to this sort of money laundering we are all working to stop. Why does the Navy chose the search engine over my work? Because of the headset. For the record I am on the anti-money laundering end and they are on the money laundering end. Navy should stop all headsets with the search engine to be charged with the money laundering they are involved with as I found out how their transfers go through this system. It is cruel and unneeded as I work hard to prove my story based on real evidence and data. I can break down their “betting system” to components. Is that needed?

Silvery substance in my brain is used for alien agenda visual sequencing, according to Gates this transfers a signal to the telephony so they transfer money to see that I don’t participate though I am working hard to communicate effectively. Can we win today and stop this visual sequencing of parts of my home that you and I don’t find appealing. How much do I have to break down? Their team should be charged with the money laundering and insider trading. Are we finished prosecutions? I ask for protection from this kind of treatment. This is my home and I do intend to keep it. Stevenson had no part in my testimony provided in advance to save all American homeowners. My negative install defeats Cheney’s enemy.

I became President and intend to see my convictions through and to participate with those on the debate stage. We have a real election on hand and it is coming. Our enemy has been identified as the one Dick Cheney talked about written about in this article yesterday. Plenty of people knew the election was stolen by a con man. The only way we are able to defeat even Cheney’s enemy is with my negative install the way it has been and will stay until the end of time. I deserve to be paid not indicted. I set out this morning to take down that enemy again and found out more about the overhead that they put in to launder drug money. I am against that and intend to testify against that post haste. No one has a right to use the star children’s telephony to launder out of my house and home. When I saw this image on Gene Chip Tatum’s website I knew it was significant. This morning I saw one of the white balls they put up starting to come down finally. Is it up to me to take in? Are the star children arrestable for it if I explain how it is done? I hope they come down in hours.

I have fought for the families and all Americans impacted by September 11th to finally have justice for almost 20 years. Can we win in hours? Why would sheriff’s be paid to blackmail the World Trade Center guilty guys? I do not do or use cocaine in any manner, nor would I even know where to purchase any controlled substances or want to. Why would the police or sheriffs drink with those who killed thousands of Americans and our service members. Just because we find out why the incident was done does not provide an excuse for those involved with such an incident now identified to not be arraigned in a professional manner. There have been other crimes committed alongside that for many years now by them and we must find out how every one of those are perpetrated.

The guilty should not be allowed to look in my home using the advanced telephony. It is like allowing a perpetrator to walk around with the individual attempting to prosecute them. Should I put the poster here? 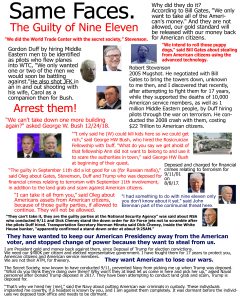 The Guilty of September 11th including those who use them, Russian oligarchs

I am happy to pursue even their enemies, however I refuse to allow them to monitor me at home. I deserve to be paid for my work. Why would individuals I turned in repeatedly have any right to harm my livelihood. Build jails for yourself. I only want justice

Stop killing kids to avoid the fact that those involved with the largest terrorism incident every need to brought to justice somehow. Jet falls down

Tomorrow are the Democratic debates which I wish to attend as I have worked hard in earnest.

I am not sure what that blonde haired guy has anything to do with me or my testimony, to me he is part of the harmful group of off worlders that was also a baby in a cage extraterrestrials picked up.

Why do I have to work alone? I shouldn’t.