Updated, rather than sitting here tomorrow with Donald Trump’s team  speaking to the media, who all of Congress has been informed stole 2016, and Trump admittedly was previously jailed as part of the deposal process, “That’s the testimony that took me to jail back then,” about my testimony, and now they are admittedly communists working against American citizens, as DeVos and others in Trump team have admitted, with Devos yesterday clearly stating, “now they know we’re the ones who have been working on communism,” they could be arrested now, and tomorrow we could work on assisting Europe with their terrorism threats with Mattis. We can announce our gold standard, money back as restitution for the damage the communists did here using full spectrum dominance against American citizens in California to steal their real estate, as was the communists stated goal, and we could announce the election convictions to prepare for 2020.

“Her income was too great to make this communism happen,” said redhead angrily about me, working with them against 327 million American citizens who are Constitutional.

This is continuing the work on redevelopment mentioned in this article relating to building structures. Internationally, America has not won a war since WWII, and we were close to defeating terrorism in the Middle East until Russian individuals became obsessed with their own popularity and hired mercenaries themselves. Those individuals then relocated oligarchs here to the USA. The key to America winning wars is fighting for just causes, and assisting our international partners through combat, intelligence and also making up for our mistakes when we harm them unwittingly.

American forces can serve in Europe to manage migrants and conduct redevelopment operations in the countries we harmed due to the American war criminals involved in combined conflict and currently attempting to create more conflict internationally. This enables us to coordinate intelligence gathering operations in Europe to identify terrorism suspects that have gotten past us due to the individuals who stole 2016 to bankrupt American citizens. We could serve with our partners to interview migrants being processed to return to their home countries for redevelopment operations.

Why can’t America win wars? Because we are not honest anymore.

Historically, when we exhibit overreach, as in the Korean war, is when we lose, and we are losing in the eyes of the world today unless we change now.

“I don’t know if anyone believes in America any more,” said an international partner. I do, and we will our wars in the future, if we actually work for freedom and justice internationally, not to start genocide with those who should be on trial and are supporting communism in America. I am available to talk to anyone all day long, every day, peacefully here or by telephone (760) 672-2028 cell or home office number (760) 945-4943.

These individuals are hired to make America lose wars.

Gordon Duff admitted because he was forced to tell the truth to NATO about his activities conducted criminally with his assets operating for communism a few days ago, about he and his wife Carol, “Just arrest us and throw us in jail. We lost every contact in NATO,” proving they were working with Dick Cheney to continue their mercenary forces through them unauthorized, as he had done in Iraq before he was thrown out in 1991.

Why are we sitting here wasting time, while our enemies taunt us? Why talk to the enemy and not me? My case is made against them and I can take it to Congress and prosecute the entire administration, National Security Agency and Congressional members. I am hired to put them on trial.

“They can’t take it, they are the guilty parties at the National Security Agency” was said about NSA who conducted 9/11 & Dick Cheney stand the down order for Air Force jets not to scramble after the pilots Duff hired.

Transportation Secretary Norman Mineta said Dick Cheney, inside the White House bunker, “apparently confirmed a stand-down order at about 9:25AM.” 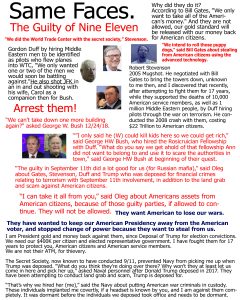 Tools for Oligarchs are using against American citizens for communism.