Harmful extraterrestrials invaded our world thousands of years ago, and we are almost free of them. Initially they installed a harmful axis on our planet, to throw us off kilter. Previously we thought being off kilter was normal.

Now with my negative perfectly put in the center where it was before they came here our planet is recovering from their harmful agenda. Our planet is almost completely round which is how our planet should be.

Extraterrestrials lie using very sophisticated methods and energetics they developed to be able to tell the lies they need to attempt to accomplish the goal to further harm people while they use the green and white alien energetics to project confidence that what they are saying is true. We need to burst the green and white energetics these harmful extraterrestrials use, to force truth to come from the extraterrestrials who then appear as nothing more than liars in the end.  It is like having a projection tool along inside your body, the energetic that they use to lie daily. It makes them look stronger than they are. Now they can really be broken down finally and you will notice the alien sheen or glow starting to break down as they die here giving us more power on the planet we own free and clear. I have worked hard for us to achieve this success, and you can read more about it here.

My negative install occurred around August 3, 2017 and published information is available about it on other websites. Here is a photo of the article I wrote about it at that time. Around that time, the deposal of Donald Trump occurred back east in earnest to protect American citizens with my testimony, while a dishonest team worked in the background to harm American citizens and operated against me and the American voters I represent as President of the United States. 2016 was stolen and 2018 was stolen because of the harmful team that partnered with the alien agenda. The deposal was conducted and I became President of the United States August 8, 2017. I have put together an entire case to futher press charges against the deposed Trump team with the cocaine land grab data. Prosecutions against Trump teams who stole 2016 should happen soon to protect American citizens.

My negative was placed shortly after this article was published.

We will not be harvested because of my work and we have kept our gold standard and money back which is our Commonwealth money so no taxes in the future. We have no need to give individuals who serve no purpose our money as they even admitted. I suspect they will even start to look uglier in the future which may be more fun for the average person as they have always had too much vanity while they really do nothing at all. It will be fun ahead for us. We must release the back end of the internet today no more whining about it, people deserve their freedom again here.

People from all over the world should want to meet me in person with all the work I have done for them to stay on our, my planet. We need an elected government in the White House. They  admittedly stole 2016 and Trump is deposed. They were jailed August 18, 2017 and need to go back to jail. We should not allow election thieves to profit on American citizens. I am technically our President of the United States and work for the American voter to take back our White House. I get tired of telling the same story. Clinton stole the Primary with the assistance of Giuliani and the oligarchs. Should I leave for DC today? I want to deliver the Gold Standard, Money Back, Elections and the Presidency to the American voter. We need no cocaine trafficking. Get my guilty of September 11th in custody. 18 years of fighting these American war criminals. When do they go to jail for the crimes they have committed. 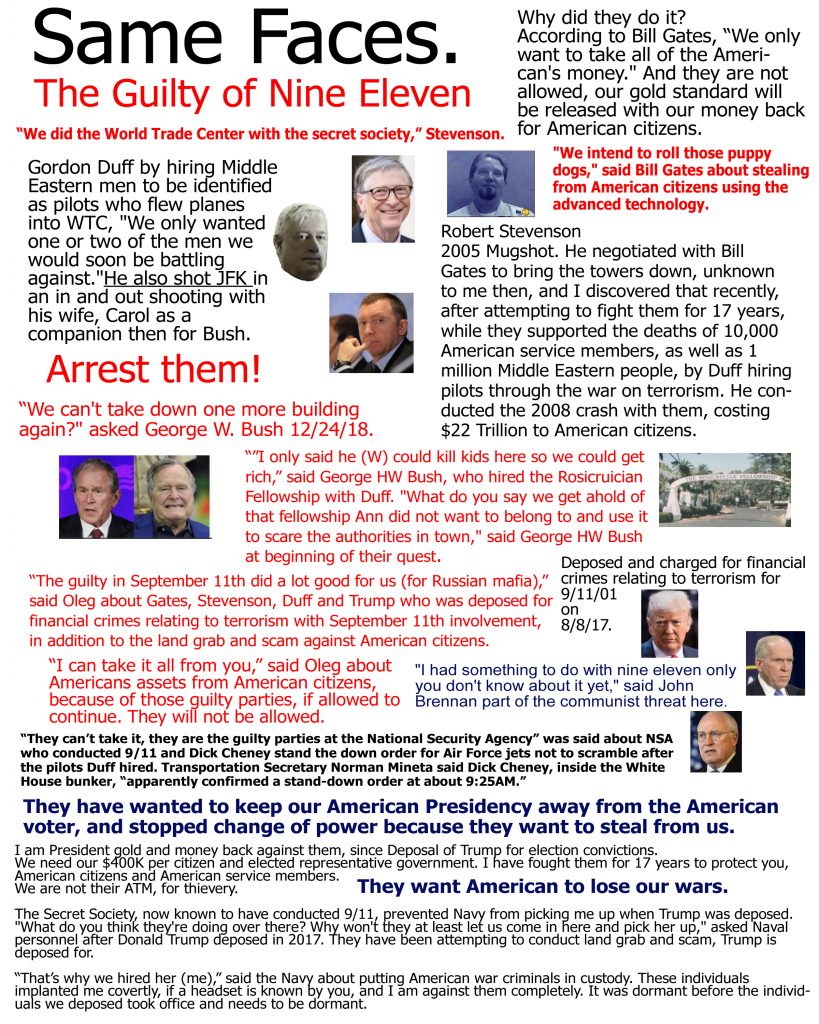